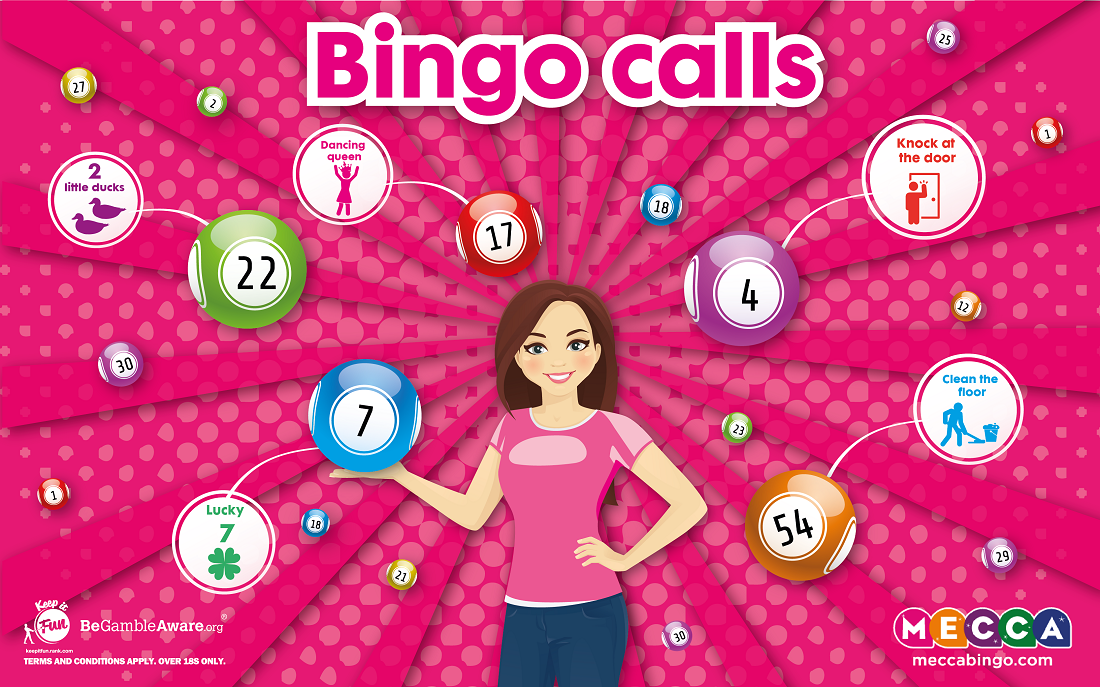 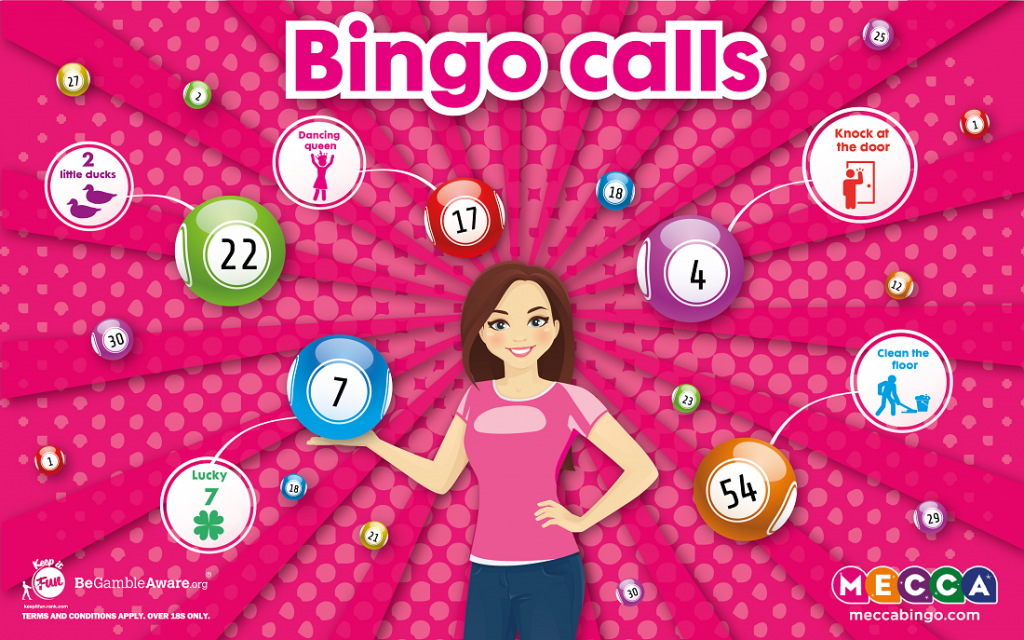 If you’ve ever played or watched bingo in a traditional bingo hall or even just dabbled in some online bingo you may have noticed that there are some strange bingo names that you simply don’t understand. Calling bingo numbers out isn’t as simple as just 1, 2, 3… and you weren’t mistaken if you think you may have heard something about little ducks or Winnie the pooh.

How is modern bingo played?

Before we get to the bingo terms, we thought that we’d quickly go over the basics of bingo to refresh your memories or show you what it’s about if you’ve never played before.

There are different kinds of bingo that can be played, but on a whole, it is played by crossing off the numbers that are on your ticket when they are called out. You win the game if you cross off all the numbers on your ticket before anyone else.

Don’t be confused by the ‘balls’ in the name of your game either, it’s simply due to the fact that the numbers being called out used to be printed onto balls. However, with the invention of bingo sites, almost all the bingo balls are generated electronically.

Back to the “Bingo Lingo”. Bingo numbers are often called out in traditional bingo rhymes. If you’re new to online bingo, it may be a tad confusing hearing “Two Fat Ladies” or other modern abbreviations and bingo sayings. However, don’t be alarmed if your fellow bingo players start using strange terms; bingo is a very sociable game and you simply just have to get to grips with the bingo slang meaning and you’ll find yourself understanding in no time.

How did the rhymes originate?

Most of the bingo terms associated with the numbers are rhymes. They were originally used in London in the mid-20th century, where they were used to pass on secret or hidden messages. These rhymes were very quickly picked up by bingo players who used them in the bingo halls to ensure that all 90 letters could be clarified easily when called out. In a big hall, the number 15 and 50 could sound very similar, so they adopted these rhymes/nicknames in order to distinctly tell letter apart. As the use of these nicknames spread, they changed from place to place and some new bingo sayings were added.

Here is a complete list of the bingo slang meaning with regards to the numbers and other strange words that you might come across if you play bingo online or in person.

This bingo saying could be a reference to Ned Kelly, one of Australia’s greatest folk heroes – but many think it’s just military slang.

Because the British are particularly fond of tea and purely because it rhymes. Put the kettle on then!

Who’s there?! This phrase rhymes with the number 4.

Tom Mix was America’s first Western Star, appearing in 291 films. His legend lives on in this rhyming bingo call. A dozen is 12 and half of 12 is 6, which is the alternative bingo saying the caller could choose.

The number 7 is considered lucky in many cultures. There are 7 days of the week, 7 colours of the rainbow and 7 notes on a musical scale.

This saying rhymes with the number 8, but there’s said to be something more about the history of this call. Legend has it that the ‘garden gate’ was a code for a secret meeting or drop off point.

During World War II, Number 9 was the name of a pill given out by army doctors to solidiers who were a little bit poorly. This powerful laxative was said to clear the system of all ills!

Always up to date, bingo callers will insert the name of the current Prime Minister into this call. It references number 10 Downing Street.

One of the many calls that relates to the shape that the number makes. The two 1s look like a pair of slender legs. Whit woo!

Many superstitious people believe that 13 is an unlucky number – but if you call house on 13, it’s lucky for you!

Referring to 14th February, the international day of romance.

Turning 16 marks a special birthday. You’re not quite an adult, but you’re no longer a child.

“You are the dancing queen, young and sweet, only seventeen!” We can thank ABBA and their 1976 hit single ‘Dancing Queen’ for this bingo call.

This milestone denotes when you’re officially an adult. Some callers also shout: “Now you can vote!”

There are 20 units in a score. The phrase ‘getting plenty’ is also a cheeky rhyme with the number.

There are 21 guns fired in a royal or military salute. 21 was also the traditional age where you’d move out of your parents’ house and have your own keys to your own place.

Again, this call exists to describe the shape that the numbers make.

A biblical reference, this is the first phrase of Psalm 23 in the Old Testament.

Another call that rhymes but it’s also said that the number 2 is the duck and you want to dive away from the number 5 which looks like a snake! One of the stranger bingo terms, that’s for sure.

This saying comes from predecimalization (old money), where two shillings and sixpence made up half a crown.

You will be in heaven if you call house on this bingo rhyming slang!

The numbers rhyme with this cheery saying.

Rhyming with 30, this phrase comes from the nickname for the statue La Délivrance, a bronze sculpture of a naked lady installed in North London in 1927. There was also a raucous song called Dirty Gertie from Bizerte, which was sung by Allied soldiers in North Africa during the Second World War.

Get up and run when you hear this rhyming call for 31.

The phrase rhymes with the numbers.

33 – All the threes/Fish, chips and peas

33 represents all the 3s available in a 90 ball game. It also rhymes with the traditional English fish supper from the chippy. Yum!

You’ll be doing this dance step if you call house on number 35.

Lots of numbers are more than 11, but this one kind of rhymes!

Life begins at 40! Who are we to disagree with this well-known bingo call?!

Life has begun so it’s time for some fun!

Winnie the Pooh books by A. A. Milne were first published in 1926. The honey-loving bear became part of the Walt Disney family in 1965.

Harking back to war-time Britain, this phrase was often used by soldiers during the war.

Said to be a visual reference to sagging trousers!

There are 90 balls in traditional British bingo [www.meccabingo.com] games and 45 is half of 90.

This phrase rhymes with the number 46.

Not particularly inspiring, but does what it says on the tin. Can you think of a better one?

This call is based on the old TV programme ‘The Adventures of P.C. 49,’ which aired from 1946–53. The show told the stories of an unconventional police constable solving cases in London.

A quirky call that rhymes. Could also be replaced with “I love my mum.”

Another great rhyme that references the Irish cross-dressing singer and entertainer who rose to fame in the mid ‘40s.

53 is the number of the VW Beetle Herbie, the car featured in a number of films by Walt Disney in the 1960s. Players often respond with “Beep, beep!”

Nobody wants to think about housework while they’re playing bingo, but this rhyme has been around for years.

Another visual bingo call. The two fives look like snakes ready to spring.

The original number of the bus route from Glasgow to Shotts. Five shillings and sixpence was how much a marriage licence used to cost. When the caller asked: “Was she worth it?” many players would shout back “Every penny!”

Referring to the number in the logo of food company Heinz. The number 57 was reportedly picked by the founder as he wanted to claim he offered the greatest selection of pickles. Five was his lucky number and 7 was his wife’s.

This is another rhyming call. Players often respond with “Choo choo, Thomas!”

There are mixed ideas on where this comes from. Some think that it’s the number of the train from Brighton to London, engine 59 – and others say that all original telephone numbers in Brighton started with 59.

Our favourite reference is back again! 5 x 12 = 60. 60 almost rhymes with frisky and is the traditional age that women could retire and draw a state pension.

This bingo call rhymes with the number.

Both these phrases rhyme with the number. Tickety-boo is slang for ‘good’ or ‘going well’.

Another cheeky phrase that rhymes, but its origins are unclear.

Not the closest rhyme to the number 64 but this bingo call seems to have stood the test of time.

The traditional age that men could retire in the UK.

This great sounding rhyme sounds like a train steaming down a track.

Bingo [www.meccabingo.com] is better with friends! Pick a mate and look out for this rhyming call.

This call explains how the number 69 looks the same upside down.

In the early 2000s, a campaign called to change this traditional call to ‘J.Lo’s bum’. What do you make of that?

We’re buzzing about this bingo call that rhymes.

A call that rhymes. Makes us want to hit the dance floor, too!

We’re striving for a full house. Hope it lands when this call is shouted.

This pop-culture bingo call references the lyrics in the popular marching song ‘76 Trombones’ from the musical, The Music Man.

So called because of the popular 1950s/60s private investigator TV show, 77 Sunset Strip.

Nothing to do with Britney Spears, just another call that rhymes!

Because he is said to have ate nothing… eight nothing… geddit?!

A bit of a confusing bingo rhyme…how can you stop and run and the same time?

Another lovely rhyme that’s been around since bingo began.

This bingo call was around well before the Bee Gees, but we like it and it rhymes!

Not only does this rhyme, but it is said to refer to the number 86 being the position of goalkeepers, who would spend the match ‘between the sticks’ or goalposts.

It rhymes and also provides a geography lesson!

A visual representation… the number 88 is said to look like two fat ladies sitting next to each other.

All the calls that go with the number 90 in bingo reference it being the highest or last number.

Whether you’re looking to play free bingo or online bingo that’s a little more competitive, Mecca Bingo has something for you! If you’re ready to win, then grab your cards and let’s go!

Will YOU help us break a world record?!