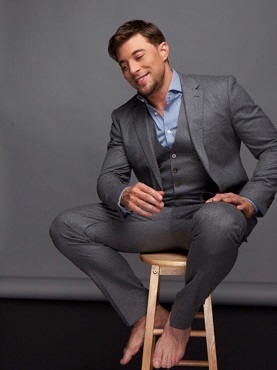 As you will know, we recently had the wonderful Duncan James (from Blue and Hollyoaks fame) in the studio doing the live draw for our December Mecca Dream Come True promotion. He was a load of fun and we all had a good giggle. You can see how that all went down here.

However, before that, we sat down with the cheeky chappie for a fun interview that is available only to readers of the Mecca blog. What we learned was amongst other things, he has the strangest choice of favourite food.

So, let’s get into it

Mecca: Hi Duncan, thanks for letting us ask you some quickfire questions. Let’s start with this one:
What does your last WhatsApp message say? We don’t need to know who it’s from, but we’d secretly like to know…
Duncan: My last WhatsApp message was from the Director of The Rocky Horror show which I got this morning. I messaged him first asking how the show was going in South Africa as the tour has moved there now to open and I wanted to message him and the cast to wish them good luck, he answered saying I was there in spirit as they’d been looking at pictures of me from the show we have just finished in the UK and they said they missed me and I was there in spirit with them, so that was a really cute message.

Mecca: What’s the worst Christmas present you’ve ever received?
Duncan: I’ve never really had a bad Christmas present as any present I’ve been given is a gift at the end of the day. I’m really grateful for anything anyone buys me, it doesn’t matter how much it is or how much it’s worth, I suppose though sometimes you are given gifts you are taken a back by. It could be a perfume you don’t necessarily like so you just say thank you very much but you know you’re not going to wear it as it might not be the scent you like.

Mecca: If you were invisible for a day, which celebrity would you spy on?
Duncan: If I was invisible for the day I wouldn’t actually spy on a celebrity I would go and spy on my partner and I would do tricks on him, I’d move things around a bit, hide his phone and play funny games and wind him up and have lots of fun.

Mecca: If you could only eat one meal for the rest of your life, what would it be?
Duncan: If I could eat a meal every single day it would definitely be.. I have weird taste btw.. it would be snails escargot for starter with garlic butter as I just love them and I can never eat enough of them, then for the main course a roast chicken dinner I never get bored of that. With a Yorkshire pudding of course.

Mecca: What is your pet hate?
Duncan: My biggest pet hate is really slow Sunday drivers I just hate people not being decisive and dawdling around it drives me mad and does my head in, I get really impatient I know it’s bad but it annoys me.

Mecca: Are you a bathroom singer?
Duncan: I’m not really a bathroom singer I’m quite quick actually I just want to get in there and have a wash and get out, depending if I’m in a bath sometimes then I’ll have a little hum or put some music on but I am normally just jump in the shower quick get out the house kinda guy.

Mecca: What’s your bingo number and why?
Duncan: As my next birthday is going to be 42 my bingo number would have to be 42, Duncan from Blue is 42.

Mecca: And finally, What is the best advice anyone has given you?
Duncan: Best advice anyone gives me and what my Mum always says to me is do whatever you want, always believe in yourself, never give up if you put your mind to it you can do absolutely anything.

So there you have it ladies and gentlemen. We have now learned that Duncan from Blue is a snail eating, Kylie loving, Sunday road raging individual who once had a mullet! Who’d have known……..?

Remember, there is still plenty of time to play in this Christmas version* of Mecca Dream Come True, so why not head over to the hub for more information