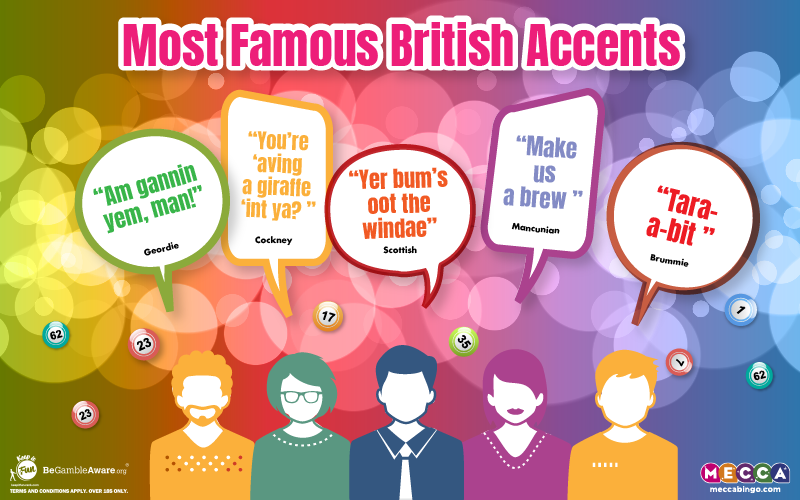 If you’re not from Britain, then when you think of the British accent you may simply imagine what you’ve been exposed to on TV. BBC and blockbuster British movies tend to portray the accent as sophisticated and poised. You may even think of the British Monarchy as your reference and you’re not alone. Most people that don’t live in Britain have the impeccably mannered Hugh Grant from Nottinghill ideal in their heads and they can’t be blamed.

However, if you live in Britain or are simply visiting, you’ll know that there is a plethora of British accents from all over. The UK is filled with rich dialects and accents shaped by different histories.

Because we have Mecca Bingo Clubs throughout the UK, we get to hear the very best British accents and while some people may consider some to be the worst British accents, we tend to love them all! We love hearing the myriad of accents every day. From the Scottish Highlands to the tip of Cornwall, every region is packed with distinct dialects, silly sayings, and funny phrases.

Here are just a few of our faves:

There are almost too many sayings in Geordie slang that we love, but here are just some of our favourites:

Shy bairns get nowt – Meaning: If you’re afraid to ask, you won’t get anything.

Some of the most famous Geordies that you’re likely to have heard of include:

Struggle to understand the accent? You’re not the first!

The word ‘Scouse’ originally comes from a stew favoured by sailors, and the popular northern port would often welcome migrants from Ireland and Wales, changing the local accent over time.

The nasal quality to the scouse accent is thought to have developed because lots of people had lingering colds in Liverpool and people new to the area copied the sound of it!

There is an endless number of scouse phrases and slang that we love, but here are just a few of the best:

Here are the most famous celebs with a Scouser accent that you’re likely to know of:

The Mancunian accent might not be as radical as some on the list of English accents, but the sheer number of musicians, actors and comedians from the region have made it one of the most commonly heard on our TVs, across our airwaves and beyond!

These are just some of the most famous Mancunians out there

Funnyman Jason Manford comes from Salford, here he is entertaining the Royal Family!

Looking for some Cockney celebs that you might know? Here are a few:

Cockney comedian Micky Flanagan can even show you how to walk like a Cockney!

Grouping Scotland into one accent might be a little unfair, but we couldn’t just pick one! The Gaelic flair of Scottish transforms the tongue – from the sing-song tones found near the border to the inner-city patter of Glasgow and Edinburgh.

Some of the most notable Scottish celebrities include:

The low octaves and flattened vowels of the Brummie accent make it one of the most easily recognised accents in the UK. The lingering tones, funny turns of phrase and gentle lilting sounds can be really relaxing and Brummies always sound down-to-earth. We adore it!

If you’re wondering if there are any celebrities that rock Brummie slang then have a look at these famous folk:

Bingo is a quintessentially British pastime and at Bingo we don’t care what kind of accent you have. If you want to play bingo online then take a look at our famous bingo sites or head on down to your local club. Whether you’re from the highlands of Scotland or the docks of Liverpool, online bingo is something that the whole of the UK can have in common. Play bingo free from the pressures of the bingo hall on your couch or on your commute and you could win big!

Enjoy our look at some of the different British accents? Check out our list of 10 Very British Things too!